People we meet and have to see on a regular basis can have a negative affect on your life and self-confidence, but only if you let them. I am a person who would get dragged down by any negative comment made from a friend or by my boss for example.  I have to say when I was employed I was blessed with brilliant bosses.  That said, I know many aren’t and I want to share a suggestion on how to deal with these situations and how to not let these people and their comments make you feel like a second class citizen.

To do this,  I’m going to share Jane’s story.

Jane had been very successful in business and had reached the level of director in the company where she worked. Jane admitted that she had an over-aggressive boss who was the chairman of the company. For the purpose of this post I will call him John.

This was the situation,  John would e-mail Jane in the morning with a question asking why the north-west of the country had not been as profitable in the last quarter compared to its usual levels. He would ask Jane to meet him in the afternoon to discuss her findings. Jane would then contact her line managers and would then write a report before attending the meeting with the chairman.

Jane was a person who had a slight speech impediment, a stutter. She would be able to talk fluently most of the time, however if she felt nervous or if she felt under pressure, she would then start having problems getting her words out and would stutter. Jane also had words she thought of as difficult and would often avoid these type of words. She was very careful when writing her report only to include words she felt confident she would be able to say.

In the afternoon She would go and meet John and present her report to him. She said that she would have no problem with her speech at this stage and that the presentation would be delivered smoothly and fluently.

On hearing the report, John would not make any comment and would instead basically just stare at Jane, slowly nodding his head up and down at the same time. Jane described this as making her feel very uncomfortable and was just praying for the silence to end and for her chairman to say something. The words from the chairman would not come and so to break the silence Jane would then continue speaking giving more reasons which were probably not correct and that were certainly not planned. These words were also not spoken fluently but with Jane struggling and stuttering.

A way round this, is at the end of the presentation, Jane can end it with a question.  For example, this is what I believe are the reasons, however I would value your opinion as Chairman of the Company.

He can then nod and stare for as long as he likes, it is his turn to talk next and Jane can sit there comfortably and just be patient.

It is very important that we do not let people like John drag us down.  By taking control, and with a little tweak, we can feel empowered in these situations. 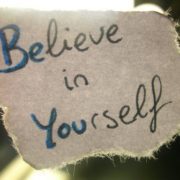 The Secret to Self Esteem
0 replies

Want to join the discussion?
Feel free to contribute!